RECIPE FOR A RECORD TURNOUT

After so many years of amazing outcomes at the CHUM Ottawa building it wasn’t easy making the move to a new venue for the 9th annual MBNA Recipe for Success Culinary Adventure and Charity Auction for LiveWorkPlay. But it was a move that needed to be made because there just had to be more space!

On March 25 the new Hampton Inn Ottawa location worked out just about perfectly! There was record attendance of at least 375, and with the additional space the auction team of LWP staff, LWP volunteers, and MBNA volunteers found themselves with time to relax before the crowd started streaming in.

The room was jumping with activity, whether it was excited chatter in the lineup for the pasta stations, the popping of balloons in the balloon bust, relaxed conversation at the hand massage table, the buzz coming from the GG Gillespie book launch, or strategizing over the 160 silent auction items!

The live auction started just after 8:00 following a brief welcome by Will Curley of MBNA and introductions of Kurt Stoodley and Angie Poirier. Then it was down to business! The top bid of the night was $4000 for an Air Canada trip to Hawaii, and there was also some competitive bidding for the Ibanez electric guitar package from Simply Guitars that went for $1000. 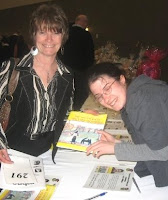 The auction itself raised the most money ever, but sponsorship dollars were down, with the end result of the second-highest total in event history of $52,000 in net proceeds. However, some of the “missing” sponsorship dollars went instead to the highly successful inaugural golf tournament back in September, so LiveWorkPlay is a big winner of community generosity no matter how you look at it.

Congratulations to all the hundreds of supporters of this first class event. In addition to the countless public supporters, about 75% of LiveWorkPlay families made significant contributions to Recipe for Success this year, and as participation continues to grow, the results will only get better and better!

New major sponsors for 2008 included The BEAR 106.9 and Scotiabank Group. The local media was also out in force to cover this event, including television sponsor the A-Channel, as well as CTV Ottawa, the Ottawa Citizen, and SNAP Ottawa Downtown. Visit the LiveWorkPlay news page for video clips and pictures!

The phone calls come in almost daily: “Can I come and see what goes on at LiveWorkPlay?” Normally the answer is a polite “no” because, after all, people are entitled to their privacy. But the annual Open House is the one big exception to this rule. 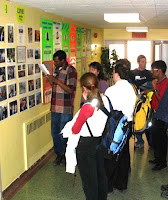 On Friday, April 11, our doors will be flung open wide from 2:00-4:00pm at 153 Chapel Street, top floor. SMILE participants and LWP staff will be on hand to receive visitors and answer questions. The entire upstairs hallway becomes a LiveWorkPlay showcase, supported by hundreds of photographs!

The Open House is a critical event for those who are currently not involved with LiveWorkPlay but are interested in Journeys/ACES or SMILE. It’s also perfect for professionals in the field, such as case workers and teachers. And of course current Journeys participants who are thinking ahead to SMILE are welcome to come out and get the information they will need to make important decisions about their future!

On March 19 Scott Singer hosted the second annual Cora’s Day for LiveWorkPlay at the 1545 Merivale Road location. $700 was raised with 25% of the day’s proce

eds. Participants, parents, volunteers, staff, and community partners including a huge table from Volunteer Canada were all out in force enjoying breakfast or lunch.

A few days later Mr. Singer also had fun at the auction, and it all connects: he bid on and won the electric guitar which was a gift for one of his staff members that was in the kitchen on LiveWorkPlay Day at his restaurant. Yes, it’s a small world after all!
OOOT-TOO PART II CONCLUDES
Another two months has flown by, and the third and fourth graduates of the On Our Own Together Too transitional housing intiative are back in family house, but only for now! Angela and Rachel are both busy working with their parents o 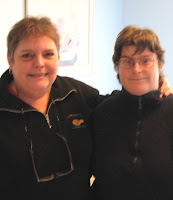 n the next steps towards moving out on their own.

On the final day of OOOT-TOO Angela and her mother Kari were guests of CBC Radio Ottawa Morning, appearing along with Keenan Wellar and interviewer Stu Mills to talk about the experience. Kari spoke eloquently about how important it is for parents to challenge themselves with taking this critical step by setting goals and timelines for moving forward.

FAMILY FUN NIGHT APRIL 11
It’s the final Family Fun Night of the 2007-2008 LiveWorkPlay year! This annual event is the “showcase” version of FFN, but this year it will have a new twist – participants, parents, and volunteers will work in teams to answer trivia and solve puzzles. It’s a fun way to learn some surprising details about the LiveWorkPlay community. Think you know it all? Think again, our team has dug deep for trivia that will both educate and entertain!
Please remember that advance registration is required: click here to register now!
PREPARING FOR A BUSY JUNE!
May will be a quiet month on the LWP calendar but that’s probably for the best, everyone will need time to get ready for a very busy month of June!
First up is the fourth annual Roger Dodger volleyball tournament for LiveWorkPlay, hosted by the Albert family June 6-8 at the Perth Tent and Trailer Park. There is lots to do for fans and players alike, and supporters are welcome to attend all or part of the festivities. Contact Ron Albert for more information!

The following week LiveWorkPlay staff members will travel to Markham to take part in the annual Community Living Ontario conference June 11-13 and their AGM that follows on June 14. The entire LiveWorkPlay community is encouraged to attend, it’s a great opportunity to catch up on important trends. This year’s theme is Citizenship!
Next up on June 21 it’s the annual LiveWorkPlay Visioning Day and Pool Party – a full Saturday of learning, sharing, eating, and fun! Visioning Day will be held at the Hampton In Ottawa at 9:00am sharp. We’ll all leave straight from there for a BBQ feast at the pool party, which will once again be hosted by the Harris family. These are both free events – but Visioning Day is a pre-requisite for attending the pool party! First we work, then we party! 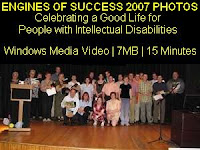 Then it’s the big one…the annual Engines of Success Recognition Banquet, Wednesday, June 25 at the Hampton Inn Ottawa! We’ll celebrate the entire year with a delicious sit down meal, a celebrity host, fun videos, and meaningful presentations honouring the achievements of people with intellectual disabilities, and the generosity of community volunteers and supporters. Tickets can be purchased from the LiveWorkPlay website and will be available in April.

LWP GEAR IS HERE
It was a long time coming, but the new LiveWorkPlay gear is finally here, and although the first batch is almost sold out, we are just about ready to submit a new order. If you want in on it, please get your order in asap!
Click here to see samples of LiveWorkPlay gear!
SHOW YOUR SUPPORT
After reading this blog you may find yourself wondering how it is possible that so much can be happening with a small organization like LiveWorkPlay. It takes a combination of dedicated volunteers, staff, board members, families, and community 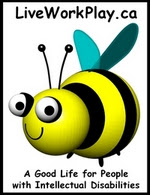 partners to make it happen. And it also takes money, of which there is simply never enough.
LiveWorkPlay has a very short list of personal donors, but you can help change that! Making a donation has never been easier – it can be done as a single contribution, or better still via a monthly deduction. Just $8.33 per month results in a donation of $100 a year! You can also donate to LiveWorkPlay in the name of another person as a tribute or as a gift. Please visit our donation page to set up your contribution today!
NEW! LiveWorkPlay is now registered as a Cause on Facebook. Click here to show your support for LiveWorkPlay or to make a contribution.
We hope you have enjoyed this 16th edition of LiveWorkPlayNews. If you have received an email about this blog in error and/or you would prefer not to receive future LiveWorkPlayNews messages, simply click here and follow the simple instructions. That same web page can also be used by newcomers who would like to join LiveWorkPlayNews, so feel free to share the address with friends, colleagues, and family who might like to subscribe.
English Français