150 people attended the End of an Era memorial and celebration at the Mayfair Theatre on March 31. This included representatives from numerous local agencies, such as l’Arche Ottawa, Citizen Advocacy, Christian Horizons, l’Association pour l’integration social d’Ottawa, Ottawa-Carleton Lifeskills, Total Communications Environment, Eastern Regional Office of the Ministry of Community and Social Services, constituency staff from the office of the Honourable Madeleine Meilleur, and many ex-residents of the Rideau Regional Centre in Smiths Falls, one of the three remaining Ontario institutions that had its doors close forever today. 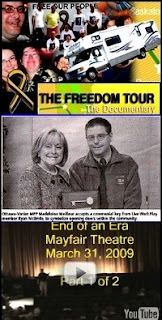 The agenda included opening remarks by LiveWorkPlay CEO and co-founder Keenan Wellar, which included the following statement attributed to the Canadian Association for Community Living and People First of Canada Joint Task Force on Deinstitutionalization: An institution does not only take the form of big buildings. An institution is any place in which people do not have, or are not allowed to exercise, control over their lives and their day to day decisions. The attitudes and practices of our society continue to control and limit the freedoms and quality of life enjoyed by people with intellectual disabilities.

Following the opening remarks came The Freedom Tour, the remarkable documentary film by People First of Canada. The audience was so moved by the experience that there was no need to announce the planned minute of silence. They went silent all on their own.

Self-advocate Jennifer Harris from LiveWorkPlay then introduced David McKillop. A former resident of the Smiths Falls Regional Rideau Centre, one of David’s first actions as a free adult in the community was to purchase a guitar and write songs. Life has come full circle: Mr. McKillop proudly, passionately, and professionally performed his songCarry Me Away For I Have Done My Share Today to thunderous applause. He was thanked with symbolic gifts presented by LiveWorkPlay co-founder and president Julie Kingstone.
The evening concluded on an upbeat note with the special screening of Sprout Film Festival entry Sheri + Paul by Sprout founder Anthony Di Salvo. This joyous love story had the audience rolling with laughter, especially during the credits when Paul discusses different forms of kissing as “I Got You Babe” plays in the background. 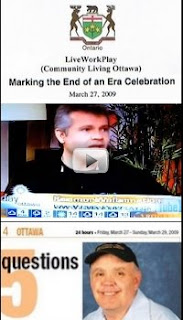 The LiveWorkPlay contribution to marking the end of an era took many forms, including very active participation with local media and a Community Living Ontario plaque presentation to Minister of Community and Social Services Madeleine Meilleur. You can listen, watch, and read about most of these media communications and events from this special web page.

With the end of the mass institutional era, a new era of change begins. Smaller institutions may be an improvement, but they are not an end goal, and there are many smaller institutions that remain the predominant residential destiny for people with intellectual disabilities. Shared rooms and doors without locks are not the future. We must all work together to ensure that this too shall pass.

FAMILIES COOK UP RECIPE FOR SUCCESS

The annual Bank of America Recipe for Success Culinary Adventure and Charity Auction for LiveWorkPlay has grow from a grassroots effort to a major event on the Ottawa social calendar.

On March 24, the event returned to its roots while at the same time continuing 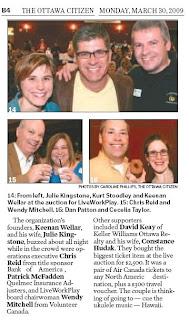 to raise major dollars for LiveWorkPlay. In light of the challenging economic times, LiveWorkPlay decided to cancel the planned catering, move the event to a community hall, and ask the membership to provide most of the food in the style of a giant potluck. The Works contributed milkshakes and The Newport contributed pizza, and when this was added to the hundreds of dishes provided by families and other LiveWorkPlay constituents, there was more than enough to feed the 350 people who came through the doors.
Kurt Stoodley from ‘A’ Morning Ottawa television flew solo as host and auctioneer this year, and his ratings have never been higher! A huge team of volunteers from Bank of America made sure the hall was ready to go well in advance of the doors opening. Board member Dan Patton teamed up with staff member Daniel Harris to run the bar, and Chris Reid from Bank of America got the evening started with a brief speech that recognized the many individuals with intellectual disabilities associated with LiveWorkPlay who work at the bank’s local headquarters.
One of the most amusing battles of the night saw former board members Sue Bools and David Kingstone fighting over a piece of abstract art by Sophie Leblond. Top bid of the night went to David Keay and Constance Hudak, who took home a round trip from Air Canada. Mr. Keay also helped bring aboard Keller Williams Ottawa Realty as a new gold sponsor, joining other gold sponsors Pylon Electronics, The Fireplace Center, Accolade Reaction, Sun Life Financial, and Marlene Burton (The Garden Fairy).
It all added up to more than $43,000 in net proceeds for LiveWorkPlay. The feedback from guests was incredibly positive. There has never been a happier buzz in the air! Catch the spirit with photos and videos on the event website.
PEOPLE ON THE MOVE! OOOT UPDATES
It’s no April Fool’s joke! On April 1, LiveWorkPlay successfully completed the purchase of 7 condominium units that are now being rented affordably to people with intellectual disabilities. This successful conclusion came about through a complex process with the Ca

nada-Provincial Affordable Housing Program. The CPAHP contributed $700,000 with LiveWorkPlay fundraising accounting for another $500,000.
The process was challenging from a variety of perspectives, including legal work. The contribution of lawyer Sally Burks (pictured right) of Perley-Robertson, Hill & McDougall LLP cannot be overstated. She completed the work pro bono within very challenging timeframes. The files piled in front of her (approximately two feet high) represent just some of the actual paperwork involved!
At the same time as the CPAHP process was being navigated, LiveWorkPlay worked with Service Coordination and the Eastern Regional Office of the Ministry of Community of Social Services to complete an agreement for providing independent living supports. 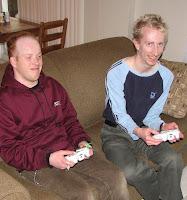 All of these activities are being conducted under the umbrella of On Our Own Together, which encompasses a variety of LiveWorkPlay housing initiatives. This includes On Our Own Together Too, a transitional housing program offered in partnership with the Community Foundation of Ottawa. OOOT-TOO provides two months of supported independent living intended to support individuals and families with the experience and information they need to pursue a long term housing strategy.
The most recent OOOT-TOO graduates are Chris and Carl (pictured right) who managed the added challenge of coping with the OC Transpo bus strike, which disrupted the early weeks of their experience. They soldiered on like the rest of the city, and celebrated their added independence when the bus system returned to service. Next up are John and Paul, who will be sharing the OOOT-TOO apartment until the end of May.
STRATEGIC PLAN: COMMUNITY LIVING

Community Living Ontario engaged in some well-deserved celebrations in Toronto on March 31 with the final closure of Ontario’s mass institutions for people with intellectual disabilities. But their leadership team barely took time to breathe before going to members to ask some key questions about future directions. Executive Director Keith Powell was among those in attendance, making the point that there is still much daily harm that is done to people with intellectual disabilities, and that we must all work together in the pursuit of a more inclusive society.

LiveWorkPlay sent a three-member delegation, including self-advocate Caroline Matter (pictured right, casting her ballot) to a gathering of Eastern Ontario

representatives in Gananoque on April 4. The annual Les Vallées meeting saw the re-election of Noreene Adam as regional director, and Claude Sauvé as regional representative for The Council, an advisory to the Board of Directors comprised of individuals with intellectual disabilities from across the province.
LiveWorkPlay tabled a report about Ottawa activities that included a description of the End of an Era event at the Mayfair Theatre, and also announced that 6 self-advocates from LiveWorkPlay would be supported to take part in the Community Living Ontario 56th Annual Conference in Kingston, June 3-5. This support will include financial assistance with travel, hotel accommodations, and conference registration.
It is hoped of course that many others from the LiveWorkPlay community will attend. Community Living Ontario is particularly interested in meeting LiveWorkPlay parents, knowing that LiveWorkPlay enjoys an excellent partnership relationship with families. Find out more and register online from the conference website.
UNITED WAY OTTAWA RENEWS SUPPORT

The United Way Ottawa/Centraide has announced their renewal of funding support for both Journeys and ACES, two LiveWorkPlay programs supportin 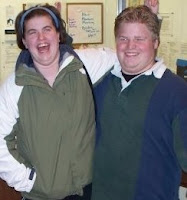 Connecting with individuals and families during the high school years offers a unique and important opportunity to anticipate future needs. Journeys is also a great way for volunteers to get involved, and it’s been a big year for new volunteer recruits!
Journeys and ACES offer significant skill-building opportunities, but that is not what the individuals and families see as the key benefit. More often they talk about lasting friendships and inter-family connections that start out at LiveWorkPlay and carry on in homes and neighbourhoods for years to come.
We hope you have enjoyed this 28th edition of LiveWorkPlayNews. If you have received an email about this blog in error and/or you would prefer not to receive future LiveWorkPlayNews messages, simply click here and follow the simple instructions. That same web page can also be used by newcomers who would like to join LiveWorkPlayNews, so feel free to share the address with friends, colleagues, and family who might like to subscribe. Send story ideas to Keenan Wellar.
English Français