This party started back in 1998 with one simple question posed to LiveWorkPlay members: what are you doing on New Year’s Eve?

From the first gathering of about 50 people, it grew and grew until 600 people attended in 2007. Then members said they actually preferred a more exclusive party, and that’s the way it has been since – unless you are invited by a LiveWorkPlay member, you can’t get in!

What makes this party so great? Dance floor participation for one thing! Plus the tradition of wild conga lines, the feverish Celtic Mix dancing, and the good feelings that come from a midnight countdown where nobody will be feeling left out! 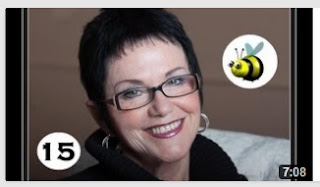 The usual revelry of this event on December 7 was enhanced this year by two surprise celebrations. Our longest-serving volunteer Pennie Styan is leaving the Ottawa area in 2013, so she was celebrated for her 15 years of service.

Pennie has volunteered with groups, as a match with individuals, in support of events, and as a member of the Board of Directors, where she is serving until her departure.

A stealth operation had representatives from United Way Ottawa participating in the dinner as one of many partner organization guests, but staff member Elizabeth Cleland and volunteer Karen Soloman (CBC TV) were actually on hand to surprise Felice Miranda with a Community Builder Award. 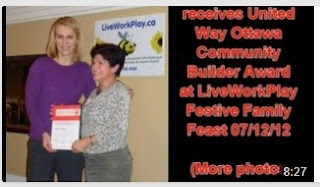 To say she was shocked is an understatement. Felice is known in the LiveWorkPlay community as the mother of member Gillian Gillespie and as a fundraising volunteer, but she has an active volunteer life all over the Ottawa community! You can learn more about Felice and Pennie by clicking on the video links above right.