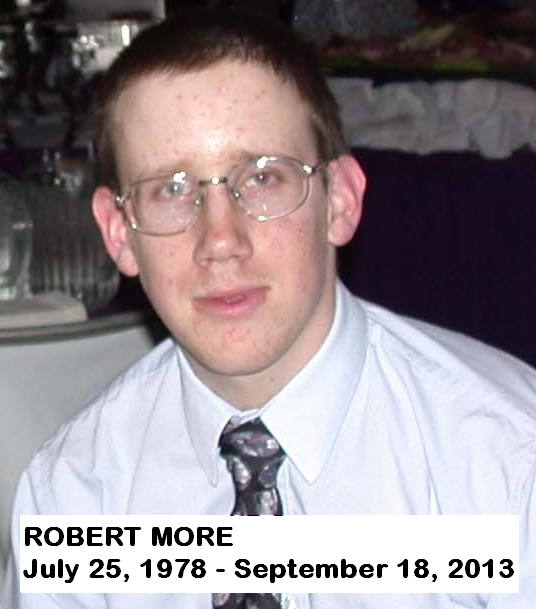 He was on his way to IBM where he had been working for the past decade. Rob was one of the pioneering members of LiveWorkPlay back in 1999 when he joined the team at the Bronson Community Thrift Centre, a social enterprise experiment that was operated with support from HRSDC. This was the beginning of an employment journey that some 3 years later led to his job at IBM. Since then Rob has kept in touch with some of his LiveWorkPlay peers, but most of our updates in recent years came to us from his mother Julie and his father Mike. Rob was living with his sister Becky in a townhome, which represented a big move out of his parent’s house.

Although Rob was in many ways a private person, those who had the benefit of being part of his inner circle were treated to a sense of humour that was beyond compare – with a subtle delivery that was often revealed only by a slight twinkle of the eye or a curl at the corner of the mouth, Rob knew how to make people laugh. He was also a passionate fan of the Ottawa Senators, capable of quoting statistics and stories that would often astound other fans who underestimated his knowledge. You can express sympathies via Rob’s online memorial site and you can also read his obituary and make a donation in his memory by clicking here. Friends may pay their respects at the Capital Memorial Chapel & Visitation Centre, 3700 Prince of Wales Dr., Ottawa, on Wednesday, September 25, 2013 from 5-8 p.m. and Thursday from 12 noon until time of Memorial Service at 1:00 p.m. Inurnment at Capital Memorial Gardens.

In Other News: AGM

Even as we mourn the loss of Rob, the work of LiveWorkPlay goes on, as we continue helping others pursue a good life in the community. The Welcome Back Family Feast and Annual General Meeting takes place on Friday, September 27. Registration closes on Tuesday so please sign up now if you plan to attend, we must report our numbers to the banquet hall staff. At this meeting we take care of all mandated annual business of the corporation, but also review important changes and dates for 2013-2014. Get your year off to a good start by getting informed!

Everyone knows about our amazing team of more than 120 volunteers that get involved in one-to-one matches with LiveWorkPlay members and/or support Friday night meetups in the community. But we are now expanding our volunteer opportunities with the introduction of the “Movers & Shakers” and “Employment Connector” roles. The former is about diversifying our funding support, and the latter is about helping make new connections for the employment of people with intellectual disabilities. Click here for more information – if it’s not right for you, maybe you know somebody who would be a great fit!

The merged LiveWorkPlay golf tournament in partnership with Rotary Club of West Ottawa (RCWO) and Cystic Fibrosis Canada Ottawa Chapter took place on September 19 at the Glen Mar Golf & Country Club with sold out participation of 144 golfers. The photographs tell the story of a beautiful day of fellowship! We would like to thank in particular Ken Sparks from RCWO who worked closely with Ali Sochasky and Jen Bosworth from LiveWorkPlay to overcome the challenges of combining two tournaments into one. LiveWorkPlay member Cooper Gage delivered a brief but rousing keynote speech that set the mood for the live auction. Thanks also to Carolyn Waldo for serving as our enthusiastic MC.

The Ontario government has reached a $35-million settlement in a class-action lawsuit with former residents of the Huronia Regional Centre in Orillia, a former institution for people with disabilities accused of systemic humiliation and abuse. It must be kept in mind that similar multimillion dollar class actions have been certified on behalf of former residents of the Rideau Regional Centre in Smiths Falls and the Southwest Regional Centre near Blenheim, Ontario. According to Orville Endicott, legal counsel for Community Living Ontario, these proceedings still have many months before they are scheduled to come to trial, and the Huronia settlement may provide a template that will apply in those cases as well.

United Way Ottawa is set to launch their annual campaign on the morning of Thursday, September 26. This will also be the start of 80th anniversary celebrations, a remarkable milestone. LiveWorkPlay Co-Leader Keenan Wellar will once again serve as a Focus Area Champion for Belonging to Community, and is excited to be working with this year’s Co-Chairs Barbara Crook, philanthropist and director of the Danbe Foundation, and Goldy Hyder, President, Hill+Knowlton Strategies Canada.

For the second year in a row, LiveWorkPlay is a finalist for a VOscar award, hosted by Volunteer Ottawa on September 26. The VOscars is more than an awards ceremony, it’s a great way to recognize those who raise awareness of volunteering and encourage volunteerism in our community. We are in terrific company with the other finalists for Best Non-Profit Volunteer Program: congratulations to Hospice at May Court and Ottawa Community Housing. We’ll find out how it turns out on Thursday night! Follow us @LiveWorkPlay for live tweeting. 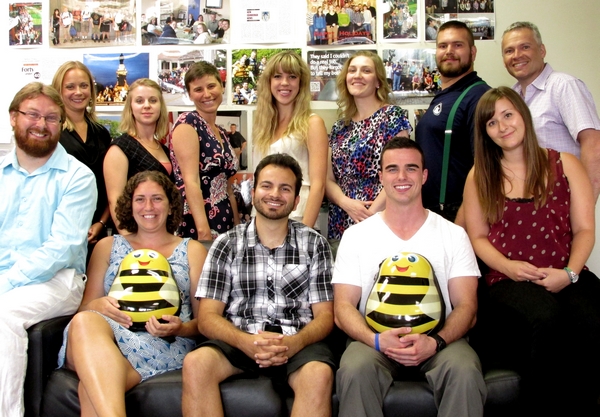 Keeping up to date with LiveWorkPlay is easy. You can watch our news page at LiveWorkPlay.ca, or follow us on Twitter, Facebook, YouTube, and LinkedIn! Looking to donate? Look no further! Full staff team (pictured) contact information is available here. We recently received more than 1000 likes on our Facebook page, thank you for your support!