September is just around the corner! Even as we enjoy those last weeks of the summer holiday season, please make a place for LiveWorkPlay on your calendar. There will be three major events of note in September but they are spaced out nicely, we hope to see you at one or all of them!

We’ll be offering wine and cheese as well as other drinks and snacks, and the book will be on sale in magazine, softcover, and hardcover formats. Admission is FREE  but you MUST RSVP (we have limited space). You don’t have to buy anything, this is a casual and fun gathering that will finish up by 7:30.

Our good friends at RCWO host this annual tournament at Glen Mar Golf & Country Club with $2000 going to LiveWorkPlay and about $10000 going to a variety of other charities who will benefit from grants later this year. We are hoping at least three LiveWorkPlay teams will participate. You can also sign up as an individual or a group of two or three. The earlybird pricing offers a significant discount but it ends on August 15, so please hurry and get the deal.

Enjoy the usual camaraderie of the LiveWorkPlay community over a delicious meal at St. Anthony’s Banquet Hall as we talk about the year ahead and also conduct the necessary business of the Annual General Meeting. Register now! There isn’t a heavy agenda this year, but there are important updates to be shared as well as electing the Board of Directors for 2015-2016. It’s also an opportunity to give thanks to some long-serving board members who are finishing up their term.

We said goodbye to Emma at Glebe St. James United Church on August 5. Taken from us at just 24, her passing was a shock and even those who attended her service and said goodbye are still struggling to accept that she is gone. As evidenced by those in attendance, Emma made many friends and those friendships were not bound by age, race, gender, disability, or any of the other superficial labels that can sometimes keep human beings from getting to know each other. Our hearts go out to her family and all those who were touched by her remarkable spirit.

GOLF IN THE FAST LANE

Our wonderful friends at Kanata Honda, Star Motors, and Dow Honda put on another great tournament with proceeds to LiveWorkPlay for the second year. Over $4000 was raised and it was also an opportunity to celebrate how all three dealerships have at least one LiveWorkPlay member on staff! Representatives from each location were presented with the first copies of the LiveWorkPlay book, which together they have sponsored, as recognized on the inside book jacket. Everyone was having so much fun at the banquet that organizer Andrew Bearss could barely get through his brief speaking agenda. “This is a great team building day for all of us and the added element of supporting LiveWorkPlay just serves to enhance the experience.” Special thanks to Jennifer and Ivan Harris who spent the day on the 13th hole taking photos of all the teams

The Community Connector team of Grace Hudson, Caitlin Fortier, and George Kranitis were joined by the Employment Supports team at the Toronto Summer Institute. Hosted by Inclusion Press the Pan Am games in Toronto necessitated a change of venue, and a great time was had by all at the campus of the University of California at San Diego. It was a fantastic experience, and Caitlin has written a report that has been shared widely on social media networks. You can read it for yourself and it will be easy to understand why the TSI experience would be a great fit with LiveWorkPlay. You’ll also learn about some of the amazing people they met from all over the world; many have stayed in touch and we’ll hope to meet up again at a future TSI!

In addition to supporting all sorts of summer fun including a gathering at the Keay-Hudak cottage as well as numerous music festivals and sporting events, LiveWorkPlay has been buzzing with activity all summer long. This includes nearing completion of approximately 100 (yes, one hundred!) annual meetings with Service Coordinator Allison Moores (usually attended by at least one other staff member along with the member and their family or other supporters) as well as ongoing intake of new volunteers. People Connector Alex Darling recently hosted a group of nine new recruits, a significant turnout for August! Many new volunteer-member matches have started up over the summer and we’ll look forward to sharing some of those stories in future.

It has also been an unbelievably busy summer with employment, this includes not only our summer employment initiative with youth, but also long-term employment with some getting their first job, and others expanding their hours of work or even adding a second job. That’s the case with Heather McAdam. Employed for several years at The Westin Ottawa, she has added a second job and is now the first LiveWorkPlay member to obtain a position with the Government of Canada! In the midst of all the action Kelsey McDaniel (third from the right, below) is a new staff member who joined the employment team for the summer and has been an important contributor. We are going to miss her as the summer winds down and she goes back to post-secondary studies, but we hope she will stay in touch! 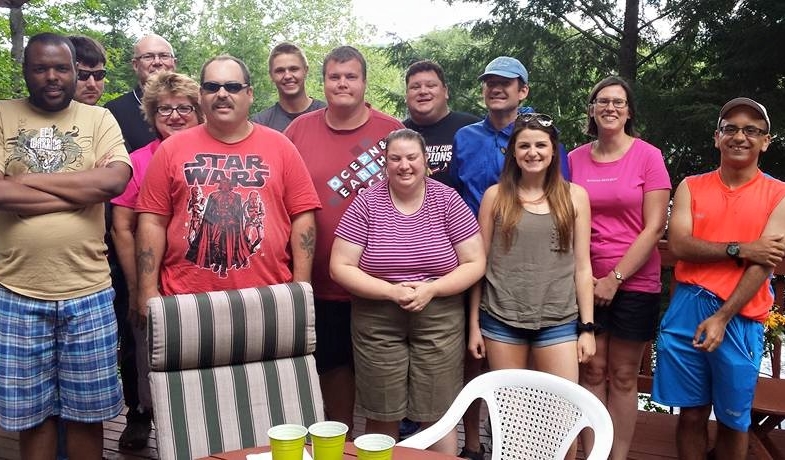 JOIN IN THE FUN
In recent weeks there has been lots of activity on our Facebook page, so please join in that fun too! You can also follow @LiveWorkPlay on Twitter, and check out our channel on YouTube. We have eclipsed 2000 fans on our page, maybe you can help on our way to 3000!
English Français