Wrapping up Super September at LiveWorkPlay was the 20th Annual General Meeting and Welcome Back Family Feast. Attendance of 140 set a new all-time record! The evening included the required corporate business of the night (as afederal non-profit corporation and registered charitable organization the AGM is critical to remaining in good standing) and a buzz of social activity that started from the moment the doors opened and carried on well past the declaration of “meeting adjourned.”

We remembered Emma Berringer, and while viewing a photo of her enjoying the 2015 LiveWorkPlay trip to Turks and Caicos, we were reminded to live life to the fullest. We celebrated Robert Jarecsni moving to his own apartment, and Jack Murphy got a happy birthday serenade! The Harris family got a long standing ovationfor their 17 years of hosting the pool party, which has come to an end (because the pool no longer exists). 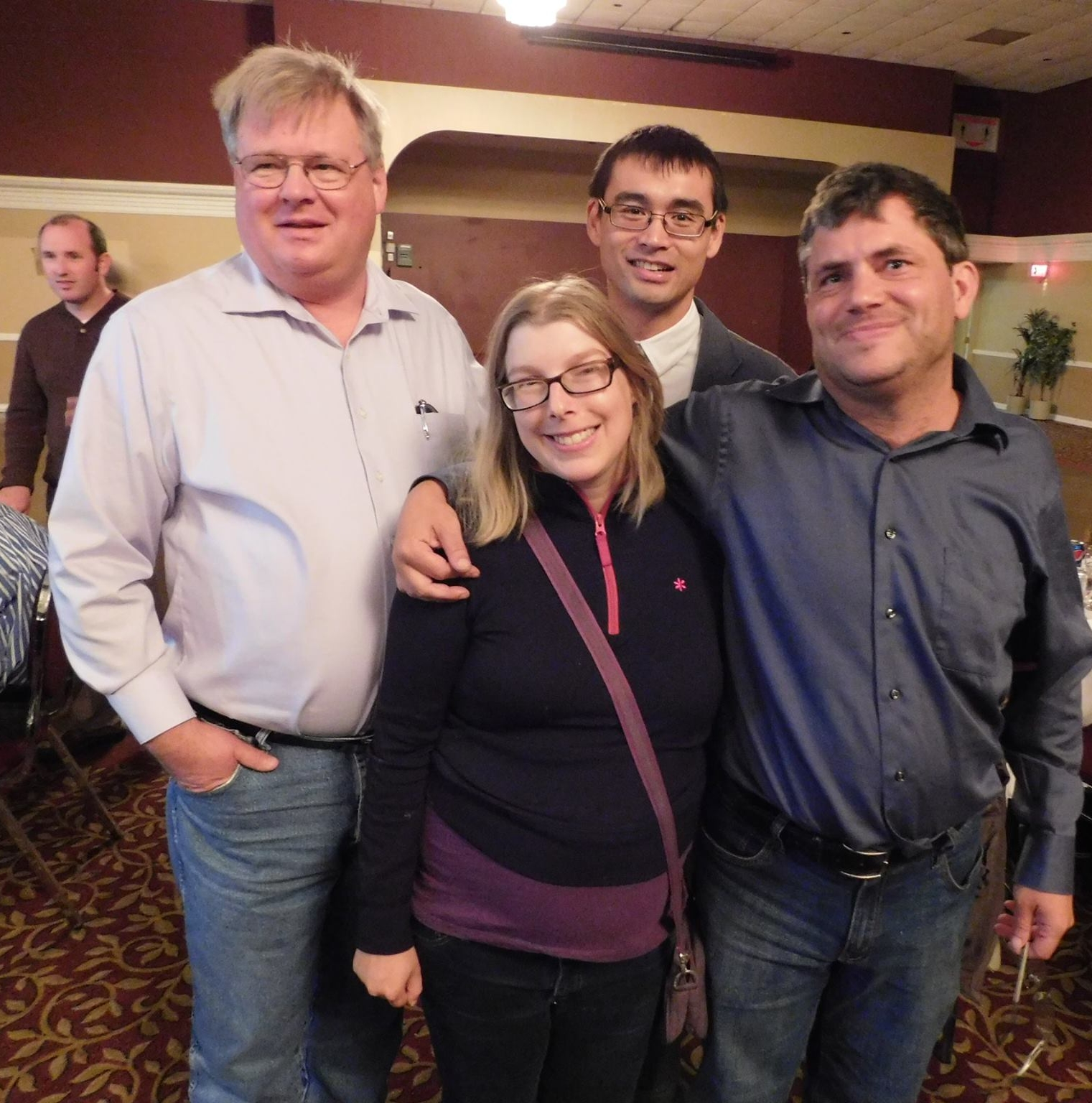 As part of the Report on Operations, Julie Kingstone welcomed new staff members Lou Hawkins, Kari Whatley, and Rebecca Coxon. We celebrated Grace Hudson adopting her second child, and in absentia, we wished Allison Moores well as she is due to give birth at any moment! The continuation of the NYE party was confirmed as was the return of a popular DJ from the past!

Back to the business of the AGM, it was a great year for the organization, in terms of the work accomplished and the resources needed to get it done. Independent auditor Ross Holmes reported a surplus of just over $50,000. As a percentage of our budget is not a huge amount (less than 4%) but in a year when we hired additional staff and expanded our office space, that’s some solid financial management!

Cecelia Taylor completed her last hours of a remarkable run as Chair of the organization, and stood for re-election alongside Andrew Bearss, Vaughn McKinney, Clement Chan, Cathy Velazquez, and Stacey Diffin-Lafleur. “In a few minutes I will no longer be Chair, but I am happy to be staying on to help my replacement get off to a great start” said Taylor, who received a United Way Community Builder Award at Engines of Success 2015 in recognition of her volunteerism. 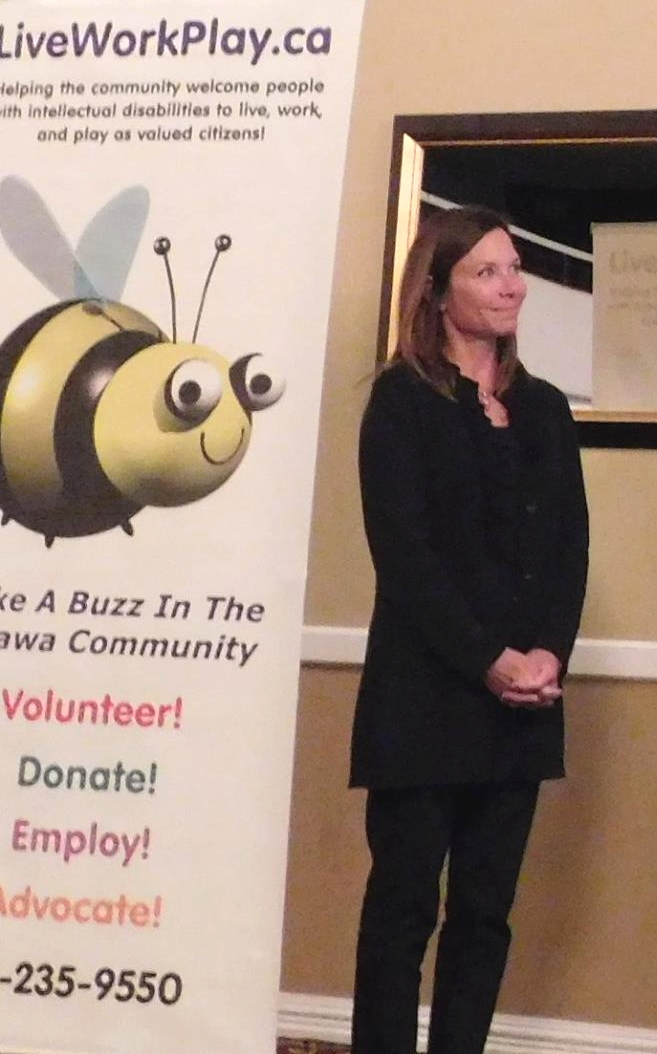 Pictured: Cathy Velazquez listens intently as her Board colleagues share their motivations for supporting the LiveWorkPlay mission.

Andrew Bearss was also called upon to accept recognition and present a $5500 cheque on behalf of Dow Honda, Star Motors, and Kanata Honda, the joint sponsors of the LiveWorkPlay book “The Courage to Fail, the Will to Succeed: Twenty Years of the LiveWorkPlay Experience 1995-2015.” The funds were raised during the July golf tournament hosted by the three dealerships. Alex Darling was swamped at the book sales table, and author Keenan Wellar did his best to rise to the challenge of requests to include personal dedications (more about the book in the open house story below).

A meeting of the Board of Directors was held immediately following the AGM, and Cathy Velazquez was chosen for the role of Chair by her peers. “We’ve already got our schedule of training and meetings sketched out for the year and I’m excited to get to work” said Velazquez, who joined the Board in 2014. “In fact, the Governance Committee is meeting before the end of the month and it will be our first full year initiating the framework of the Governance as Leadership model from BoardSource.”

All of the materials from the AGM are available to the public at http://liveworkplay.ca/docs/AGM-2015 and this includes the minutes from the meeting which are considered a draft until adopted at AGM 2016. 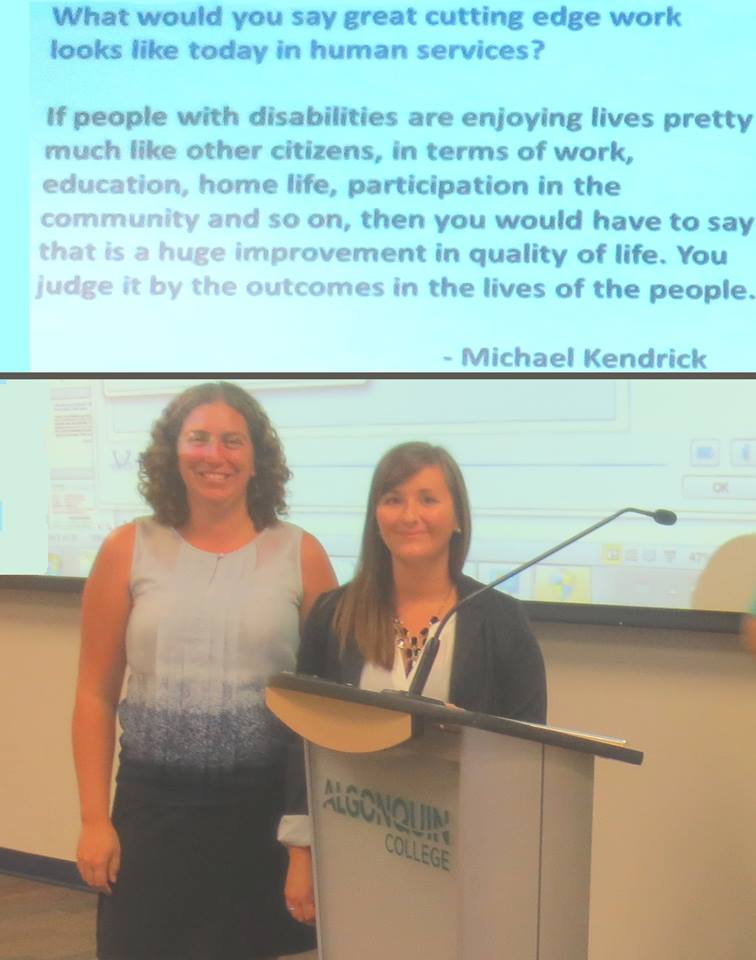 They reported an attentive and inquisitive audience and received positive feedback about the value of sharing the LiveWorkPlay perspective on what it means to deliver person-centred supports and services. And as often happens Alex received inquiries about volunteer opportunities!

A shout out to our friends at Mills Community Support who were featured in the Spotlight on Transformation. LiveWorkPlay was asked to comment and joined in by offering praise for their “inclusive thinking and practices, not only for the organization, but for the communities and citizens they impact every day.”

We’d no sooner finished thanking the Rotary Club of West Ottawa for contributing $2000 to LiveWorkPlay from their annual golf tournament on September 17 when just 5 days later senior staff member Jen Bosworth was recognized with the President’s Rose for her contributions to the club which includes hosting the Four-Way Test awards. 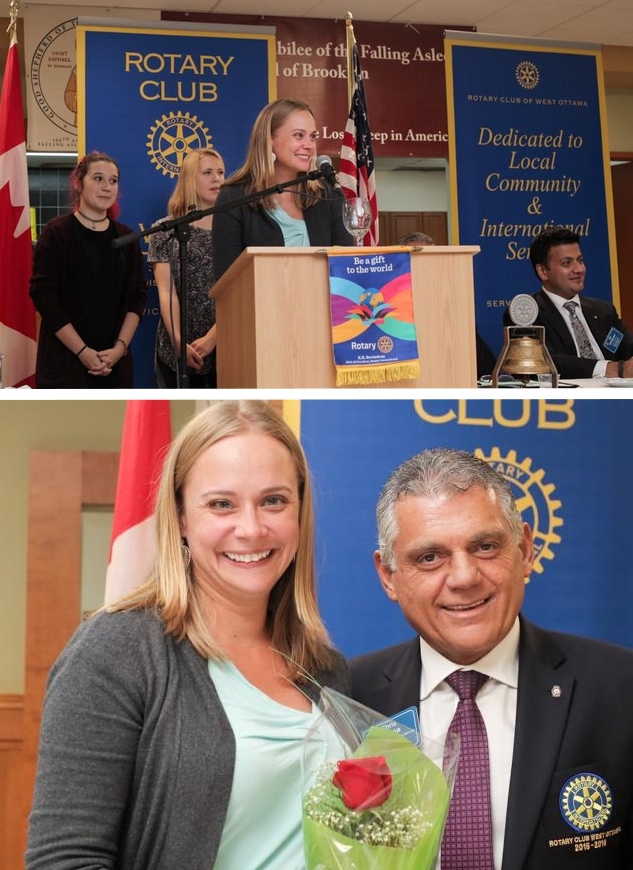 The test asks: 1. Is it the truth? 2. Is it fair to all concerned? 3. Will it build goodwill and better friendships? 4. Will it be beneficial to all concerned? Some of the young recipients of the award are pictured in the top half of the photo behind Jen at the podium. In the lower half of the photo President Chris Wanna presents the President’s Rose.

LiveWorkPlay is a corporate member of RCWO. Our focus is on supporting Rotary at Work (promoting employment of people with disabilities) but we are also aligned on broader goals related to the development of healthy and welcoming communities.

The golf tournament at Glen Mar featured gorgeous weather and lots of fun and fellowship. LiveWorkPlay was represented by staff members Keenan Wellar and Tim Ropchan, with former LiveWorkPlay treasurer Sean Malone, member Phil Landreville, and family supporters David Keay and Constance Hudak. With his impressive golf skills, it was no surprise that Tim won the putting contest, but no one was more shocked than Keenan to take home the “closest to the pin” award.

LESSONS FOR ONTARIO FROM OREGON

Many of us in the LiveWorkPlay community are closely following the issue of sheltered workshops in Ontario. Disability Rights Oregon is reporting some exciting news about progress to eliminate segregation and replace it with support for the inclusion of people with intellectual disabilities in their own communities. 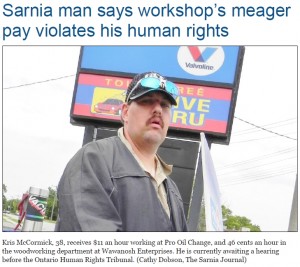 The Oregon process may serve as a conceptual blueprint for the transformation of other jurisdictions and it is highly recommended reading. Here are some highlights:

Data on the size and location of sheltered workshops throughout Ontario is difficult to find, and in many cases, citizens who do not have involvement with Developmental Services may not know of their existence. This was the recent experience in Ottawa when many locals were astounded to learn of their existence. You can make a difference by supporting the employment of people with intellectual disabilities and advocating for inclusive practices and outcomes.

WELCOME TO THE NEIGHBOURHOOD

Once you’ve had an open house, it’s official, you have moved in! On September 8th Mayor Jim Watson and Alta Vista Councillor Jean Cloutier helped welcomeLiveWorkPlay to the neighbourhood at your new headquarters in the Pebb Building at 2197 Riverside near Billings Bridge Plaza. It was a packed house featuring wine, cheese, and other snacks. Pictured below members Caroline Matte, Chandra Ghattas, Fred Dixon, and Ryan Nevitt completed the Smart Serve qualification and received an honorarium for serving the wine, while Kyle Berthiaume managed the rest of the beverages.

This was also the official book launch for The Courage to Fail, the Will to Succeed: Twenty Years of the LiveWorkPlay Experience 1995-2015. The book highlights the 20 year history of the organization and is based on the presentations delivered at Engines of Success 2015.

There is a foreword by Al Condeluci, with introductions and an afterword by author Keenan Wellar. After speeches by the mayor and councillor, Keenan shared a reading from the book known as “What I learned from Paul.” Although humorous, the anecdote about power and personal development also generated nods of approval. The Ottawa Community News conducted a detailed interview about the event and the book, which you can read online.

“I hope this books is especially helpful to outsiders looking in and perhaps seeing in a simplistic way an organization that has a long history of success” said Keenan. “The reality should be understood quite differently. We look at some past ‘successes’ and shake our heads. So this is really about listening, thinking, trying, learning, and repeat…if we are indeed a leading-edge organization it is not because we’ve always known just what to do, it’s because we truly don’t believe we are ever finished improving.”

COME SCHMOOZE WITH US!

This is one Ottawa’s best annual networking events! Hosted by the GenNext United Way Ottawa cabinet, LiveWorkPlay is both famous and infamous for contributing to this lively evening. 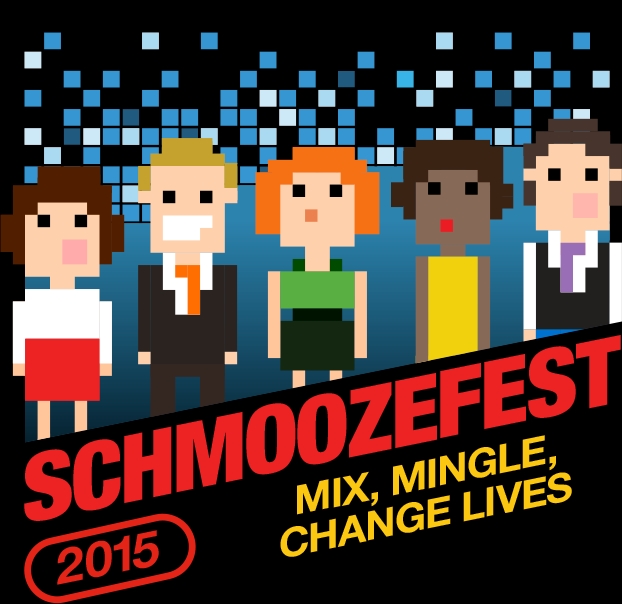 Members of the LiveWorkPlay staff team will be out in force and they are inviting up to FIVE members of LiveWorkPlay to join them (at no cost). Contact your Community Connector if you are interested. This is of course a public event and you don’t need to apply to LiveWorkPlay if you want to go, just sign yourself up ($40). This year the venue is Lansdowne and should be even more fun than usual!

United Way Ottawa is of course a current funder of LiveWorkPlay employment supports through a grant that continues until next year, but we are also partners in supporting the promotion of employment for people with disabilities.

This includes supporting campaign launch events as well as actively participating in the Community Cameras project on Twitter.

When Fred Dixon is not busy working at RedBlacks games or serving wine (see open house story above) at LiveWorkPlay events, he pursues social and recreational interests in the community, and sometimes his Community Connector Caitlin Fortier helps him find the right venue. 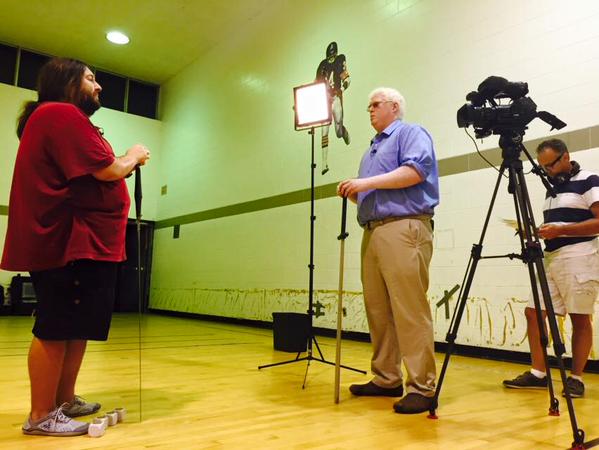 When AMI This Week television contacted Keenan to express interest in a story that features the importance of the “Play” part of our name and mission, Fred’s inclusion in and contribution to the Ottawa Swordplay community was offered up immediately by his Community Connector Caitlin Fortier, and Fred as well as Swordplay agreed.

AMI was able to visit Fred and his peers to capture some live footage and also conduct an interview, which will be a segment when the new season of AMI This Week begins on October. When we have the exact date we’ll let you know, but it’s a great show worth checking out any time!

Thanks to a connection made by Daniel Spagnolo of the Employment Task Force, LiveWorkPlay received an invitation to participate in an Ottawa Construction Association charitable giving event. Keenan was invited to represent one of three organizations making a five-minute speech after which the 30 or so attendees were asked to contribute (with a recommendation of $100) to the charity of their choice. “Chair Tony Sottile and President John DeVries made what could have been a bit of a nervous time very comfortable for us all” said Keenan. Over $1600 was donated to LiveWorkPlay!

In recent weeks there has been lots of activity on our Facebook page, so please join in that fun too! You can also follow @LiveWorkPlay on Twitter, and check out our channel on YouTube. We have eclipsed 2000 fans on our page, maybe you can help on our way to 3000!
English Français