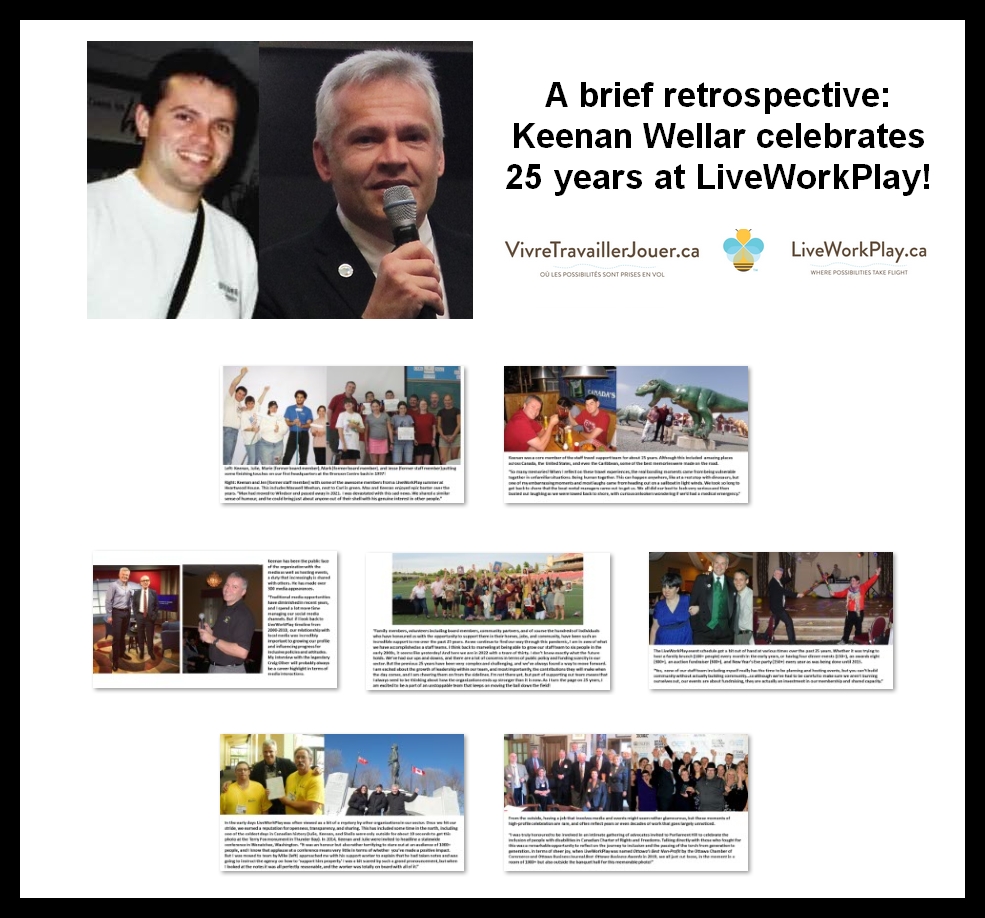 July, 2022, is the 25th work anniversary for LiveWorkPlay Co-Leader and Director of Communications, Keenan Wellar. The occasion was celebrated at a community gathering last month, and this brief retrospective is a formal commemoration of this incredible milestone. 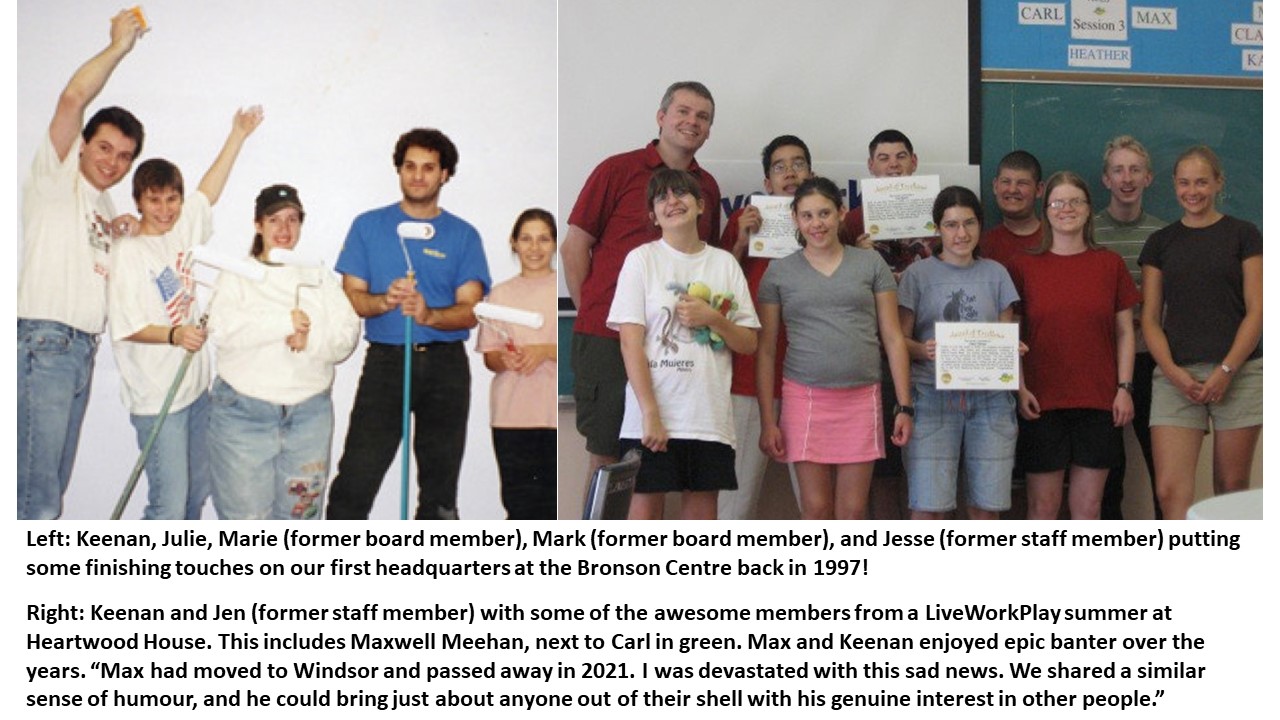 Right: Keenan and Jen (former staff member) with some of the awesome members from a LiveWorkPlay summer at Heartwood House. This includes Maxwell Meehan, next to Carl in green. Max and Keenan enjoyed epic banter over the years. “Max had moved to Windsor and passed away in 2021. I was devastated with this sad news. We shared a similar sense of humour, and he could bring just about anyone out of their shell with his genuine interest in other people.” 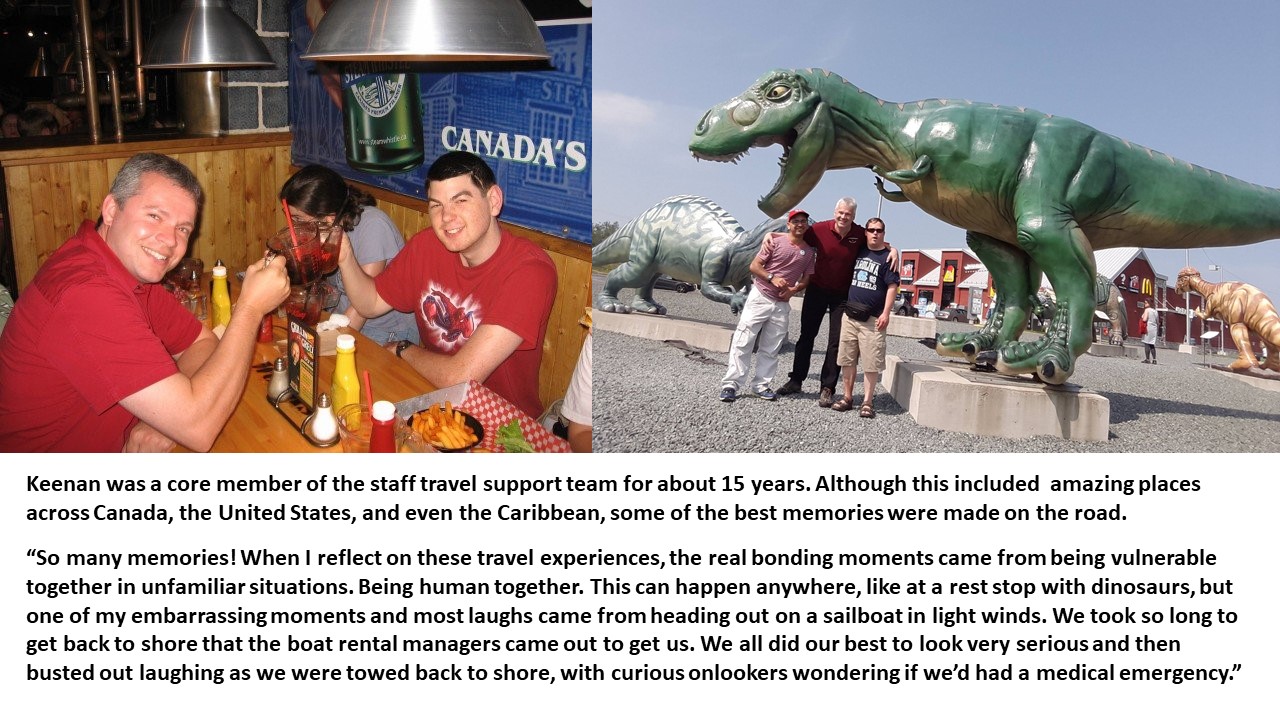 Keenan was a core member of the staff travel support team for about 15 years. Although this included  amazing places across Canada, the United States, and even the Caribbean, some of the best memories were made on the road.

“So many memories! When I reflect on these travel experiences, the real bonding moments came from being vulnerable together in unfamiliar situations. Being human together. This can happen anywhere, like at a rest stop with dinosaurs, but one of my embarrassing moments and most laughs came from heading out on a sailboat in light winds. We took so long to get back to shore that the boat rental managers came out to get us. We all did our best to look very serious and then busted out laughing as we were towed back to shore, with curious onlookers wondering if we’d had a medical emergency.” 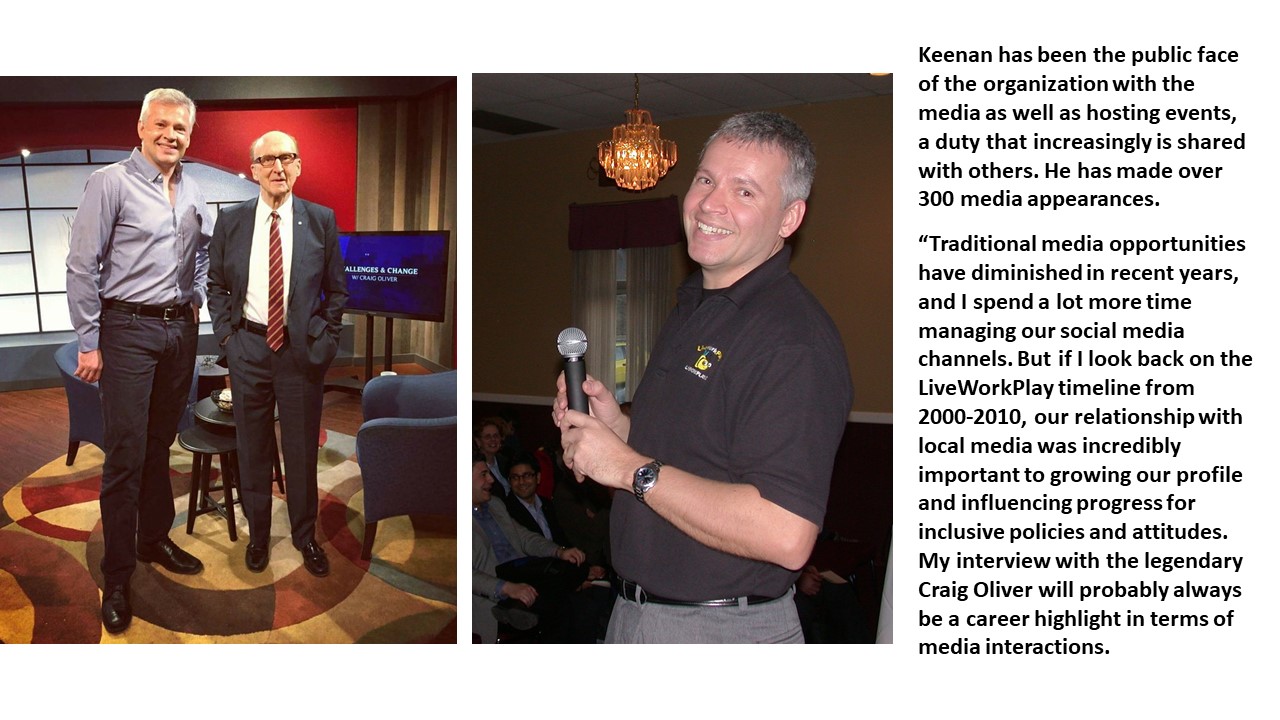 Keenan has been the public face of the organization with the media as well as hosting events, a duty that increasingly is shared with others. He has made over 300 media appearances.

“Traditional media opportunities have diminished in recent years, and I spend a lot more time managing our social media channels. But if I look back on the LiveWorkPlay timeline from 2000-2010, our relationship with local media was incredibly important to growing our profile and influencing progress for inclusive policies and attitudes. My interview with the legendary Craig Oliver will probably always be a career highlight in terms of media interactions. 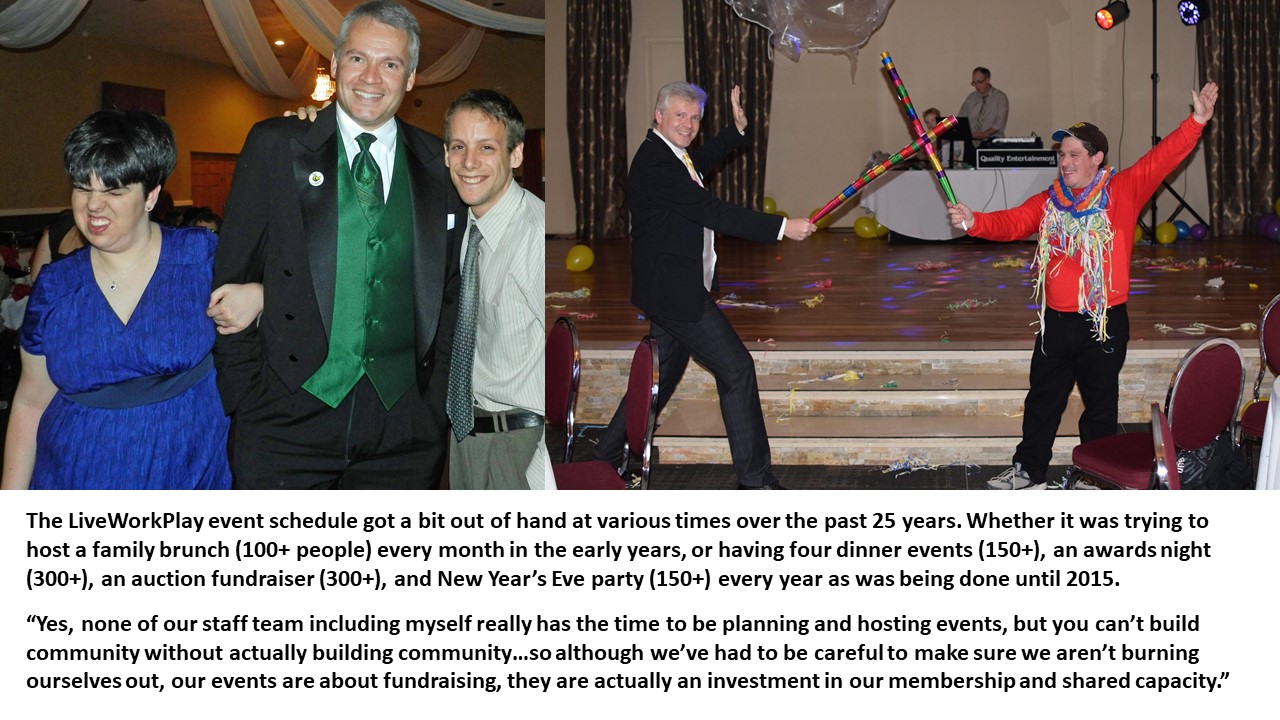 The LiveWorkPlay event schedule got a bit out of hand at various times over the past 25 years. Whether it was trying to host a family brunch (100+ people) every month in the early years, or having four dinner events (150+), an awards night (300+), an auction fundraiser (300+), and New Year’s Eve party (150+) every year as was being done until 2015.

“Yes, none of our staff team including myself really has the time to be planning and hosting events, but you can’t build community without actually building community…so although we’ve had to be careful to make sure we aren’t burning ourselves out, our events are about fundraising, they are actually an investment in our membership and shared capacity.” 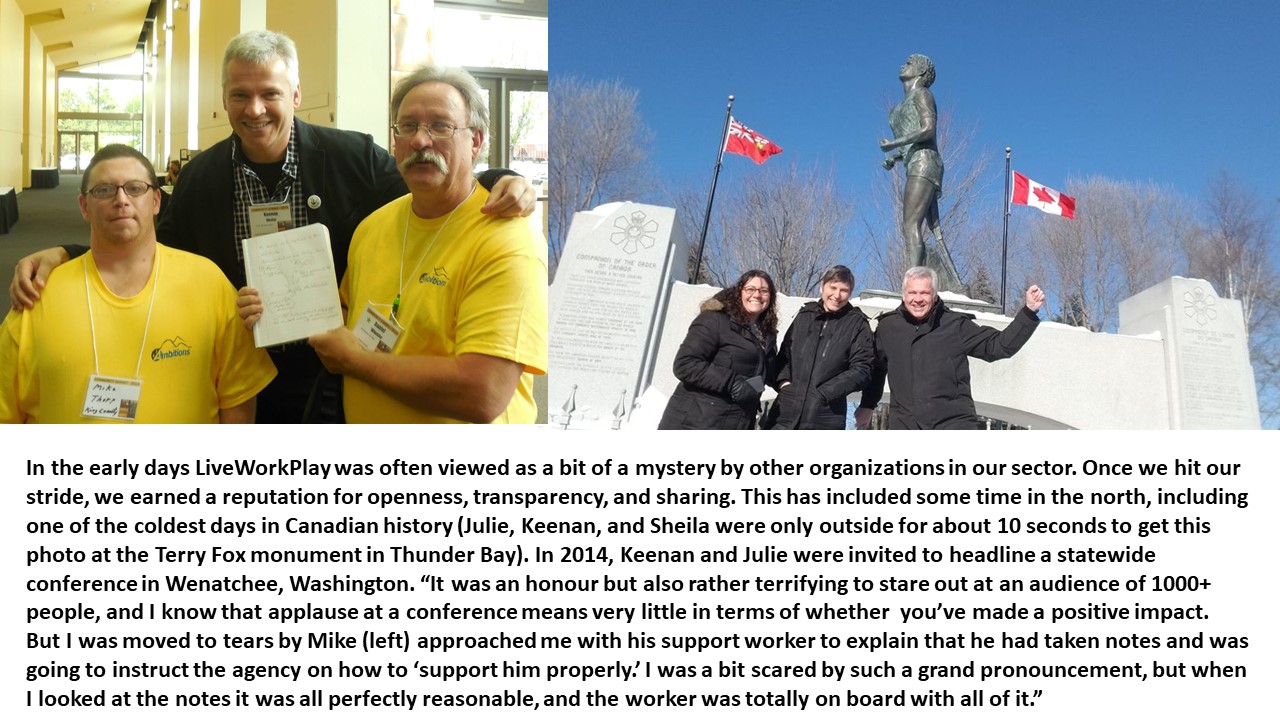 In the early days LiveWorkPlay was often viewed as a bit of a mystery by other organizations in our sector. Once we hit our stride, we earned a reputation for openness, transparency, and sharing. This has included some time in the north, including one of the coldest days in Canadian history (Julie, Keenan, and Sheila were only outside for about 10 seconds to get this photo at the Terry Fox monument in Thunder Bay).

In 2014, Keenan and Julie were invited to headline a statewide conference in Wenatchee, Washington. “It was an honour but also rather terrifying to stare out at an audience of 1000+ people, and I know that applause at a conference means very little in terms of whether  you’ve made a positive impact.  But I was moved to tears by Mike (left) approached me with his support worker to explain that he had taken notes and was going to instruct the agency on how to ‘support him properly.’ I was a bit scared by such a grand pronouncement, but when I looked at the notes it was all perfectly reasonable, and the worker was totally on board with all of it.” 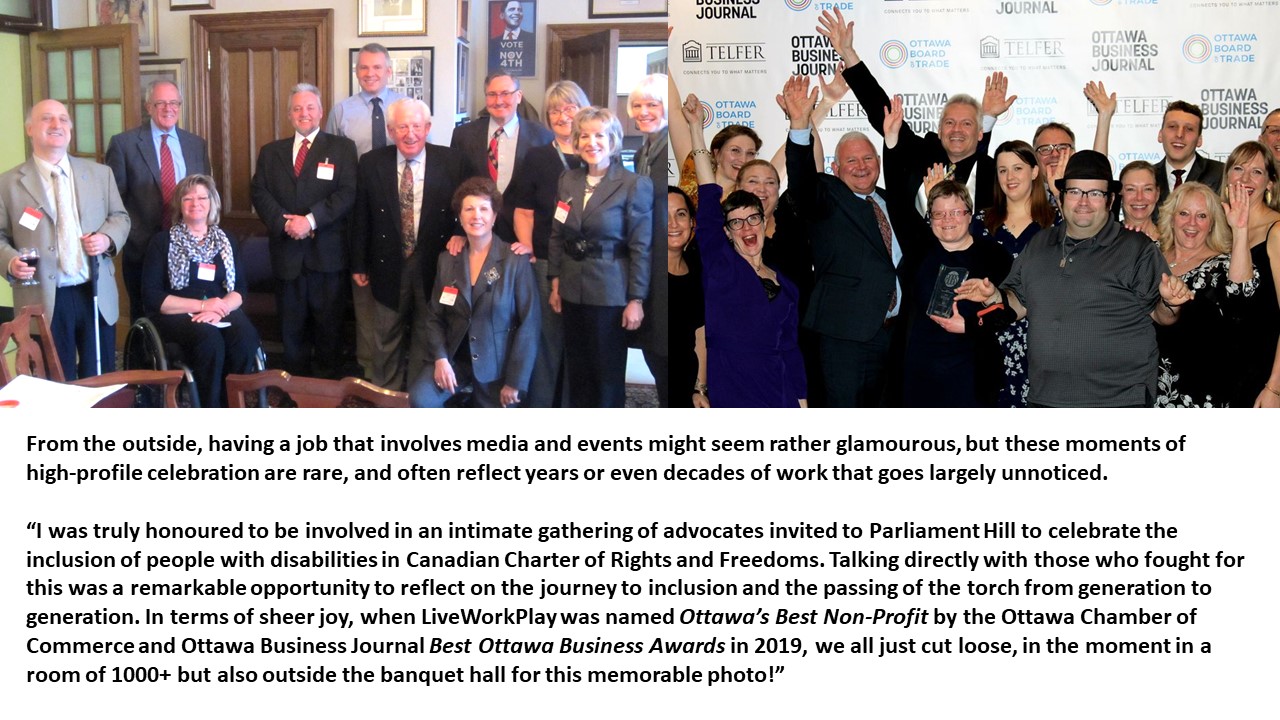 From the outside, having a job that involves media and events might seem rather glamourous, but these moments of  high-profile celebration are rare, and often reflect years or even decades of work that goes largely unnoticed.

“I was truly honoured to be involved in an intimate gathering of advocates invited to Parliament Hill to celebrate the inclusion of people with disabilities in Canadian Charter of Rights and Freedoms. Talking directly with those who fought for this was a remarkable opportunity to reflect on the journey to inclusion and the passing of the torch from generation to generation. In terms of sheer joy, when LiveWorkPlay was named Ottawa’s Best Non-Profit by the Ottawa Chamber of Commerce and Ottawa Business Journal Best Ottawa Business Awards in 2019, we all just cut loose, in the moment in a room of 1000+ but also outside the banquet hall for this memorable photo!” 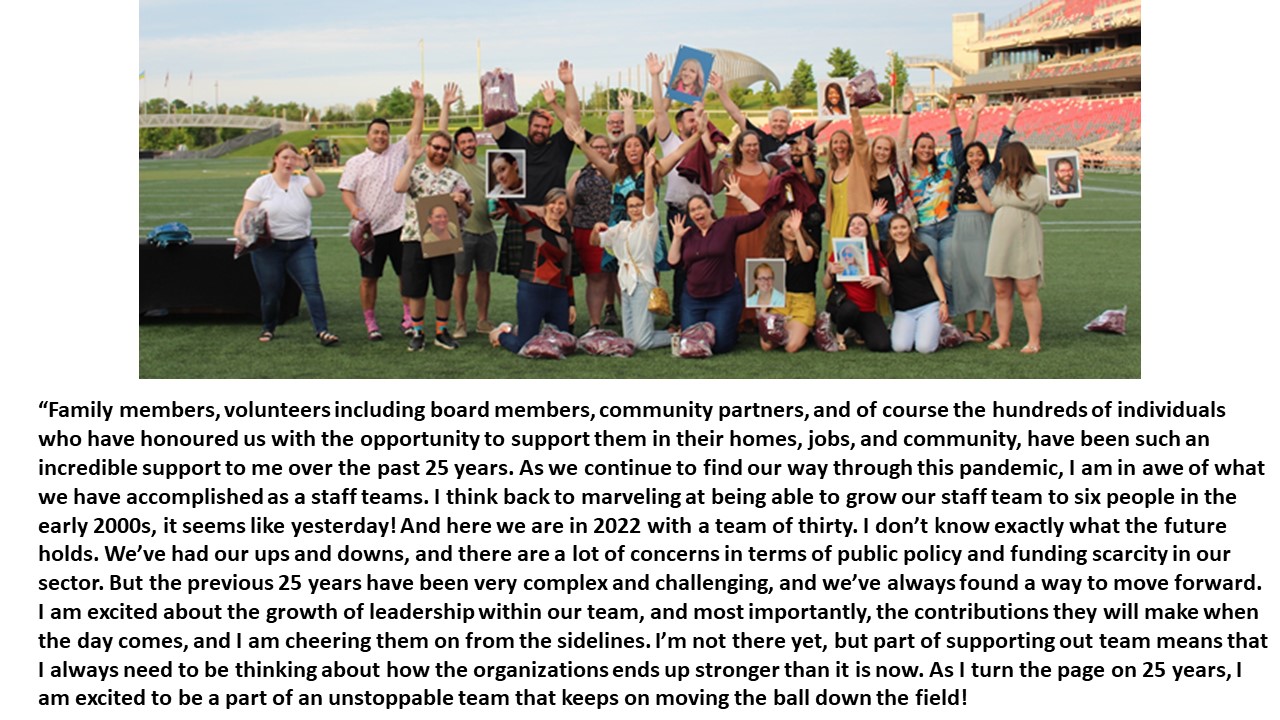 “Family members, volunteers including board members, community partners, and of course the hundreds of individuals who have honoured us with the opportunity to support them in their homes, jobs, and community, have been such an incredible support to me over the past 25 years. As we continue to find our way through this pandemic, I am in awe of what we have accomplished as a staff teams. I think back to marveling at being able to grow our staff team to six people in the early 2000s, it seems like yesterday! And here we are in 2022 with a team of thirty.”

“I don’t know exactly what the future holds. We’ve had our ups and downs, and there are a lot of concerns in terms of public policy and funding scarcity in our sector. But the previous 25 years have been very complex and challenging, and we’ve always found a way to move forward. I am excited about the growth of leadership within our team, and most importantly, the contributions they will make when the day comes, and I am cheering them on from the sidelines. I’m not there yet, but part of supporting out team means that I always need to be thinking about how the organizations ends up stronger than it is now. As I turn the page on 25 years, I am excited to be a part of an unstoppable team that keeps on moving the ball down the field!”