Thanks to a change of fiscal year-end to March 31, the Annual General Meeting has moved to the end of June. The new version features snacks and beverages and a straightforward focus on our by-laws and responsibilities as a federal non-for-profit corporation. 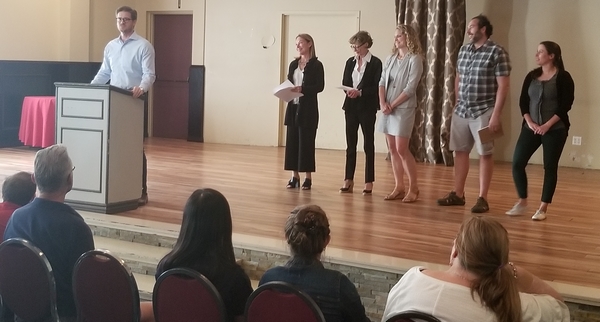 This was also the first AGM with our new membership structure in place, featuring a mix of individuals supported by the organization, family members, volunteers, community partners, and members at large.

The AGM is still open to all supporters, but the voting membership is now limited to 35 persons who have applied for that role and have been approved by the Board of Directors.

Pictured above right, Matt Shipley, Cathy Velazquez, Christine Felteau, Kari Whatley, Danny Spagnolo, Michelle O’Doherty and Brigid FitzPatrick (not pictured, she was attending a meeting in Toronto) were re-elected to the 7 positions on the Board of Directors. You can learn more about the AGM and access the complete annual report on the LiveWorkPlay blog. 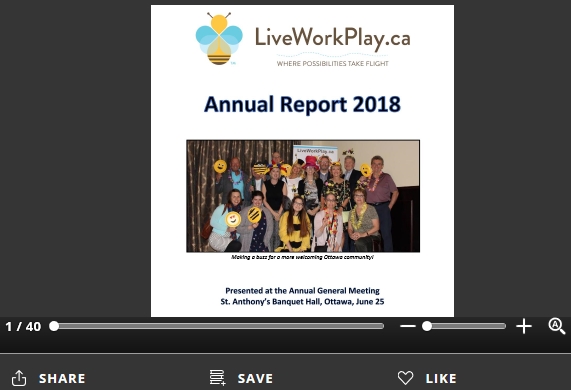 About 75 people attended the meeting at St. Anthony’s Banquet Hall on June 25, and the feedback was very positive. Voting member Warren Murphy, who has been involved with LiveWorkPlay for 20 years now, prefers the new format. “I found that without the dinner going on at the same time as the meeting I could really hear what the board members and executive staff were saying and it was much better.”

Warren is of course referencing the previous format where the AGM was combined with the Welcome Back Family Feast each September. That event that typically draws 150 celebrants will be continuing as well, so this is one of those true win-win situations!

A CANADA DAY TO REMEMBER 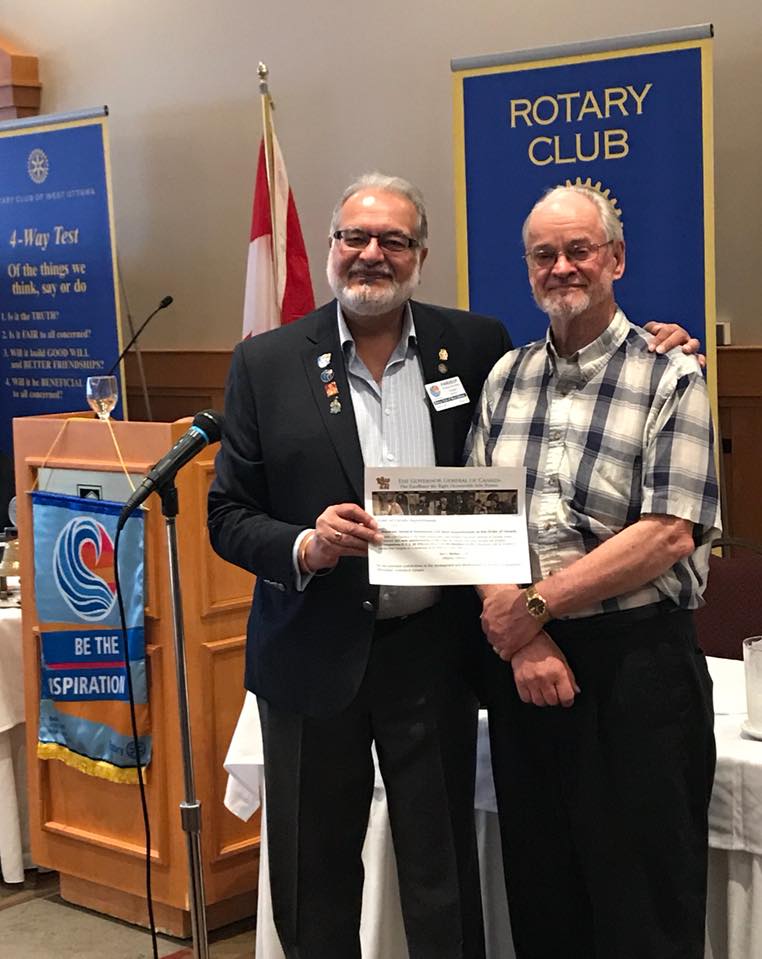 Among the voting members (community partner category) in attendance at the AGM was Barry Wellar, longtime sponsor of the annual My Own Home bursary at the annual Make A Buzz Ottawa celebration.

Just in time for Canada Day he received the news from the Governor General that he is to become a Member of the Order of Canada for his work in Geographic Information Systems. While we may think of incredible GIS technology like Google maps as modern inventions, Professor Wellar proposed an Information Systems in Geography course at the University of Kansas way back in 1970!

Barry is expanding his role with LiveWorkPlay by joining Jen Soucy at Rotary Club of West Ottawa as part of our organization membership. It is difficult for Jen to consistently attend the weekly meetings, so Mr. Wellar will be helping out when his own schedule permits. Attending on July 3, he was surprised when President Pardeep Ahluwalia and the RCWO membership shared the news about the Order of Canada appointment, and he was additionally humbled by a standing ovation! You can learn more about this exciting news on the LiveWorkPlay blog.

BNI (Business Network International) of Eastern Ontario hosted their annual golf tournament on June 13, and although a few raindrops fell, mother nature held off the real storm until dinner time! It was a wonderful day with more than $10,000 raised, thanks to a combination of careful planning and all out hustle by BNI leaders Denis Brisson and Jocelyne D’Aoust, as well as the amazing volunteer team. Of course, no funds are raised without the generosity of attendees and sponsors, who are mainly comprised of BNI members and their networks. Learn more about this event on the LiveWorkPlay blog.

Our partnership with Meals on Wheels Ottawa goes back to our very first year of full-time operations, and it was with great pleasure that our co-leaders Keenan Wellar and Julie Kingstone attended their 50th anniversary, along with long-time LiveWorkPlay member Lucas Rogers. Lucas was also honoured with his 3000 hours of service pin as an MOW Ottawa volunteer!

Always thoughtful, the team at Meals on Wheels also surprised the trio from LiveWorkPlay with a huge framed certificate celebrating 20 years of partnership. You can learn more from this June 11 blog.

WELCOMING GUESTS FROM NEAR & FAR, SPREADING OUR WINGS

Learning from others and sharing what we know is essential to being the best we can be at LiveWorkPlay. In recent weeks we hosted delegations from Community Living Mississauga and the Republic of South Korea. How’s that for variety!

As for our own travels, a highlight would be Jen Soucy’s participation in the Canadian Association for Supported Employment (CASE) annual conference in Halifax. Jen presented with Ashleigh Benson of Gateway Association in Edmonton and Marcus Jamieson from Team Work Cooperative in Halifax, representing the partnership that hosted a national celebration of inclusive employment and International Day of Persons with Disabilities on December 3, 2018. 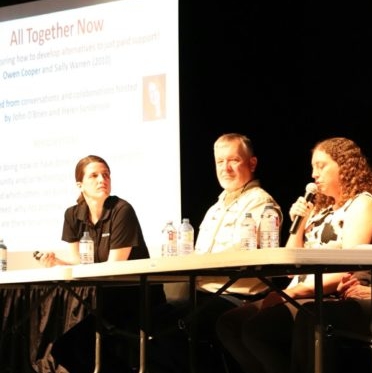 Anna Nelson, our ODSP Employment Supports manager, joined with Keenan for the June 14 edition of the Families Matter Co-op Coffee House Series. It was a robust discussion focused on employment, and the format of the series was very energizing.

Grace Hudson (right) presented at the Coming Together 2018 conference “My Home, My Community” hosted by Service Coordination. Grace shared some of the highlights of our partnership with Multifaith Housing Initiative and our Housing Task Force project, and Allison Moores spoke with family members during the networking session. 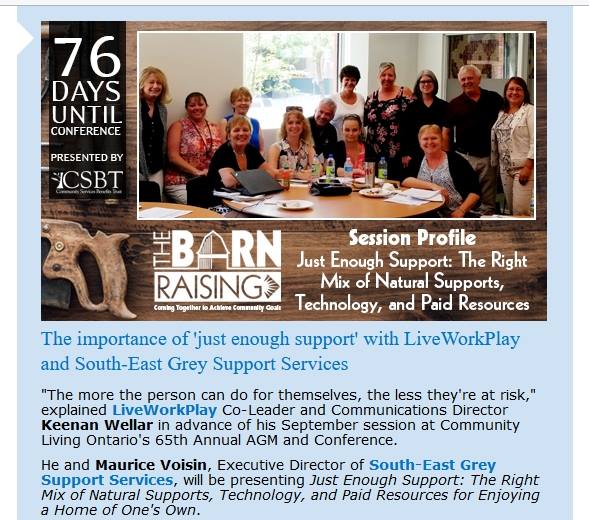 Keenan had a variety of learning experiences, including right here at home as an invited speaker for part of the Ontario Brain Institute exhibit at the Canadian Museum of Nature, where he presented on the topic of neurodiversity. He traveled a little further as a keynote for the 35th anniversary of Developmental Services of Leeds and Grenville, and then carried on to Toronto to take part in a From Presence To Citizenship delegation with Developmental Services Ontario’s relatively new Regional Housing Coordinators (photo of meeting participants is part of the image to the right). The delegation included Maurice Voisin from South-East Grey Support Services, who will join with Keenan to host a session about “just enough supports” at the Community Living Ontario annual conference in September.

Starting this fall when our board, volunteers, families, staff, or partners get invites to talk about LiveWorkPlay, they’ll be supported with new videos! Over the years we’ve benefited from United Way Ottawa, Dow Honda, Innovation, Science and Economic Development Canada (ISED), Hire for Talent and others who have helped with funding and/or producing videos that help highlight our work in supporting inclusive employment. But what about our important work supporting people with intellectual disabilities to enjoy homes of their own, take on valued social roles, and build their natural relationships throughout the community? 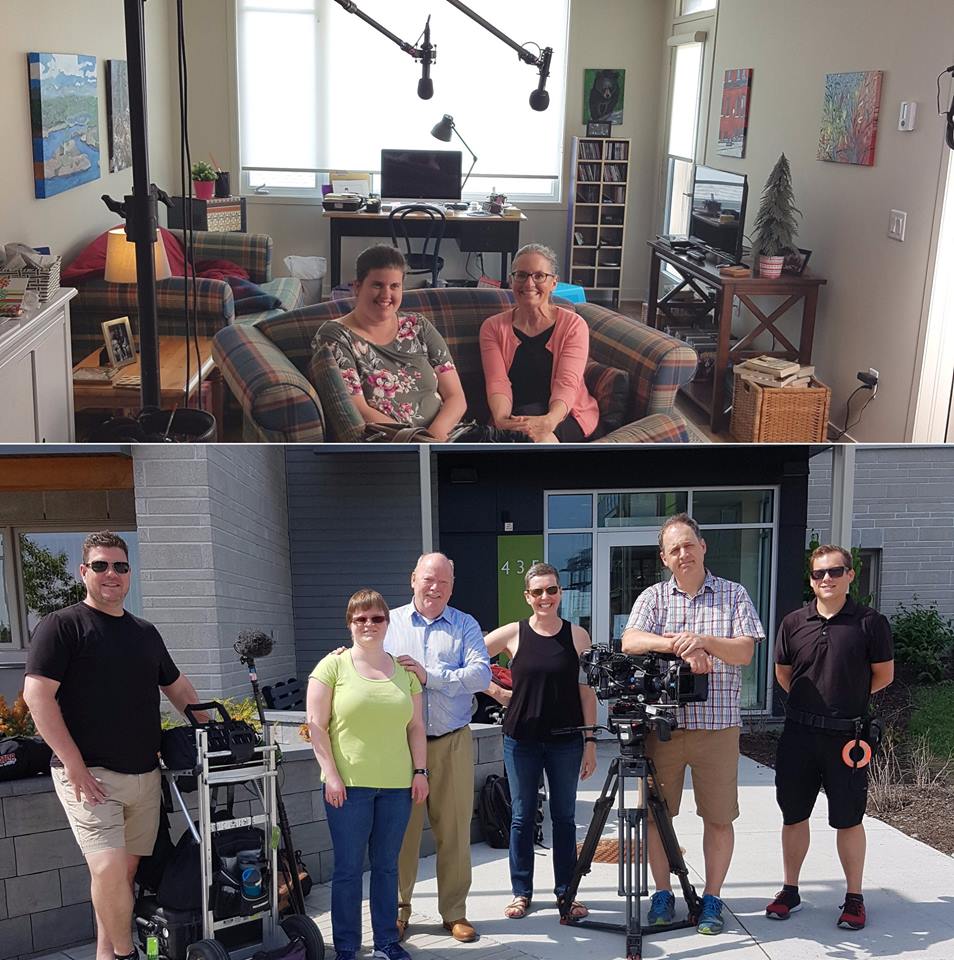 To other agencies in our sector with more traditional programmatic approaches (and to individuals and families who haven’t experienced person-centred, assets-based, community-focused supports) what we do at LiveWorkPlay might all seem rather fantastical, so we’re excited for the opportunity to explain how practical and effective the “just enough supports” approach really can be!

With the help of some funds from the Developmental Services Housing Task Force, we’re working with Affinity Productions on a series of short videos that will explain the approach and illustrate the outcomes with members, parents, friends, community partners, and staff. We don’t want to say much more for now. Several segments have been completed and together we’ll be working on the finer details over the summer. Stay tuned! 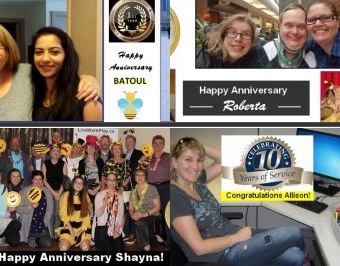 For those who were expecting to see a staff recognition ceremony at the AGM on June 25, fear not, it will continue to be a part of the Welcome Back Family Feast in September.

In addition to this once-per-year ceremony, LiveWorkPlay is also celebrating the work anniversaries of all staff members with an individual blog that features a brief question and answer.

If you don’t follow our blog, you’ve missed four recent anniversaries, but don’t worry, they are just as fun to read today. Click here to find out more about Batoul, Roberta, Shayna, and Allison, and all the other anniversaries (so far!) of 2018. 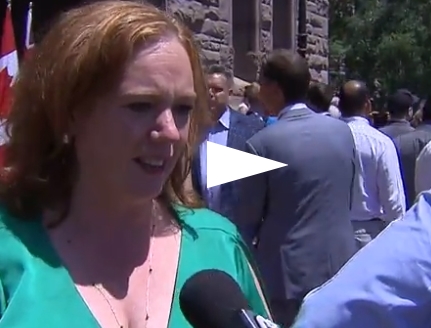 We got the news just in time to include it in today’s edition: Lisa MacLeod (MPP for Nepean) has been named Minister of Children, Community and Social Services and Minister Responsible for Women’s Issues. LiveWorkPlay looks forward to working with a Minister from our own region, as the proximity should help with increased communications, not only about LiveWorkPlay’s work in this community, but as members of umbrella organizations such as Ottawa Developmental Services Network, From Presence To Citizenship, and Community Living Ontario.

There are many important issues requiring attention, too many to list, but they certainly include access to affordable housing and person-centred supports, as well as income and employment supports. The latter became a topic of concern during the election when the inclusion of people with intellectual disabilities in the employment standards act was challenged by pockets of sheltered workshop advocates in Guelph and Renfrew.

Keenan spoke in support of the importance of promoting authentic employment (and having labour laws as well as resources to support real work) but was concerned by some of the media coverage, and in particular some unchecked assertions that people with intellectual disabilities are “not worth $14 an hour.”

“We are not speaking from an ivory tower when we say that it is wrong to label people with intellectual disabilities as being incapable of authentic employment.” says Keenan.

“We used to run sheltered programs of our own, with the assumption that this was the right thing to do. That assumption was based on the belief that the people we were supporting just couldn’t succeed in the labour market.”

“After making big changes back in 2005 we started being a part of the solution instead of being a part of the problem, and as a result we have supported so many successful employment relationships that at times we cannot keep up with employer demand!”

“Life is not a program, and it is time that we – as a province – invest in real outcomes for real people. Segregation delivers very negative results. Sheltered programs are very expensive, and create dependencies that are unhealthy not only for those who are stuck in a programmatic lifestyle, but also for communities that miss out on their gifts and what they have to offer.”

Minister MacLeod and Minister of Labour Laurie Scott will play an important role in ensuring that people with intellectual disabilities are fully included in all of the same employment standards protections as other citizens. 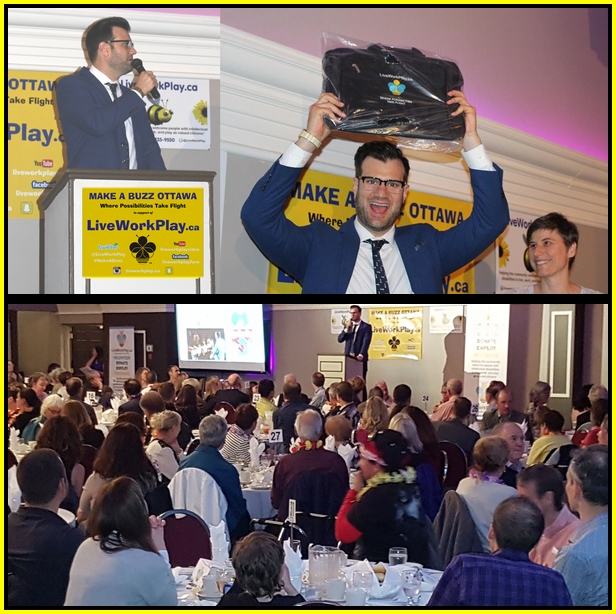 Way back on May 10 the entire St. Anthony’s Banquet Hall facility was busting at the seams with 350 enthusiastic LiveWorkPlay supporters, and yet another sold out Make A Buzz Ottawa community recognition event.

It was an incredible night with host Graham Kay.

All of the awards are summarized in our photo blog, and you can even watch the entire ceremony on YouTube!

We hope you have enjoyed this jam-packed edition of The LiveWorkPlay News. If you like what you see, why not make a donation? We’ve got a new and improved donation formthat saves you time and gives you more options!